Holiday Reception at the White House

Just before Thanksgiving a letter came in the mail. As I was opening it I thought it was another generic Christmas card; I was wrong. I was invited to a White House Holiday Party to represent the Forum For Equality. 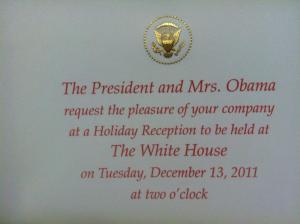 Jetting off to Washington D.C. for a day is not in any budget – mine or the organization’s. But I could not imagine turning down such an amazing honor and once-in-a-lifetime experience, so my husband, Jason, and I cashed in our airline miles and headed to D.C.

I haven’t been to D.C. since my eighth grade class trip, so arriving at Union Station, driving by the sites and then finally the White House was overwhelming. Entering at the South Lawn, we stood in line with people of all different backgrounds. Some lived in D.C., but many where from all four corners of the country. They were making the same life changing journey as we were.

As we got to the front of the line, Jason and I saw what we dubbed the “problem children.” A part of the tent with about 20 people who weren’t “on the list” and waiting for someone to come and rescue them from Holiday Party Purgatory. As I handed the Secret Service agent my passport, I took a deep breath and said a Hail Mary. When he looked up and said “Welcome to the White House,” my heart melted a bit. Jason made it through too, but I had made it clear to him that I was going with or without him. From that point on and three more checkpoints later, we giggled at the thought that this surreal moment in our life was actually happening. Upon walking in the door, a young Marine handed Jason a small pink index card with “3:45” typed on it. We shrugged and kept walking.

We mixed and mingled. I taught the bartender what a Poinsettia was (cranberry juice and champagne). We chatted about New Orleans with a gentleman that worked at the Small Business Administration. He is friends with former Mayor Ray Nagin. But really we wanted to look around the glamorous rooms and six different Christmas trees. We walked through the lobby where the Marine Chamber Ensemble played holiday tunes as Santa walked around taking pictures with all the guests. I took one of course. Jason passed. 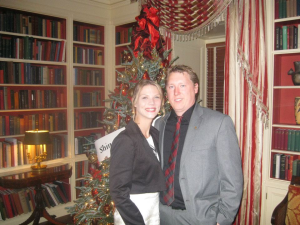 Sarah Jane and Jason in front of Christmas tree

Jason and I inquired with one of the Marines what the pink card meant and she told us that was our time slot to meet the President and First Lady. After we picked our chins up, we looked at each other in shock and immediately started to think of what we were going to say. Of course my first reaction was that I should throw a “Who Dat” in there somewhere, but Jason advised against it. We still had time before our appointment with the President, so we set out to find some FedHeads – other Equality Federation organizations that I was sure were around there somewhere.

That’s when I heard Gautam Raghavan introduce himself to someone and I swooped in. Gautam is the LGBT Coordinator in Office of Public Engagement with the White House. He was the one who had extended the invitation to the Forum For Equality, and I was eager to meet him. Gautam, Jason and I chatted for a bit and then the three of us were determined to find Rebecca Issacs, Executive Director of the Equality Federation. We found Rebecca along with Denise from Michigan, AJ from Missouri and Jody from Kentucky. They had already met the Obamas and were sharing their experiences with us. I must say I love being with my fellow equality cohorts. It always revives the soul to meet people who do the same type of work you do.

Okay. It was 3:30. Time to gear up. Pull it together. Take a deep breath. We walked down to the main hallway where we stood in line for about twenty minutes, walked through four different rooms and were served cookies and champagne as we waited.  Everyone was astonishingly pleasant. We got to the room right before you go in to meet HIM; they take your card with your name, purse, drinks, everything. You are given a personal Marine escort. I introduced myself to him, we chatted. Sorry, I can’t remember his name. I was trying not to stumble my heart was beating so fast.

As we walked through the door I saw them. Tall and elegant. As we went through the line, my Marine, as I affectionately referred to him, told me that it goes by very quickly and not be surprised if it’s over before I realize I’m even talking to him. I’m two people away and there is a lady chatting it up with the President like there aren’t 200 people behind her in line. I nudged my Marine with my elbow and said “real quick, eh?” – he laughed. I laughed. Then he shh’d me. I always get in trouble for being too loud.

My turn. I forgot to mention that my ear still hadn’t popped from the flight that morning, so I am basically deaf in my left ear at this point. My Marine introduces me to the President as SarahJane. I shake President Obama’s hand and reintroduce myself: SarahJane Brady from New Orleans, LA. Thank you.

There were a million things I wanted to say. About equality. About health care. About insert important point here. But I just said “thank you” because that is what I wanted to say. All I could say. Well, that and “Who Dat” but Jason had advised me against it. Why did I listen to him?

Then I met Michelle. What a beautiful, classic lady! I pulled it together and we had a delightful exchange regarding children and her health initiatives. And then it was over. These were probably the most memorable two minutes of my life. It was an honor just to be invited. It was a surprise to meet the President and First Lady. It was an experience I will never forget.

About Forum For Equality

The Forum For Equality is a statewide human rights organization dedicated to the establishment of a society free from discrimination and to the support of good government. We believe that the fastest and most efficient way to achieve these goals is to educate our communities and to constructively participate in the political process.
View all posts by Forum For Equality →
This entry was posted in Uncategorized and tagged Sarah Jane Brady. Bookmark the permalink.

1 Response to Holiday Reception at the White House

This site uses Akismet to reduce spam. Learn how your comment data is processed.