Give it up for the New Orleans Pelicans!

Posted on September 22, 2017 by Forum For Equality 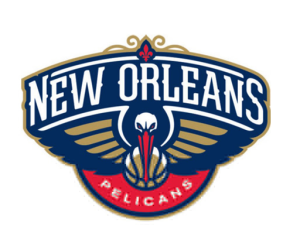 IT IS ALMOST HERE — the 2017 Acclaim Awards Gala is TOMORROW! 2017 has been an exciting year, and we are thrilled to celebrate our victories. As we prepare for a new year of accomplishments and potential challenges, we want to highlight an organizational leader that has made a tremendous impact on equality here in Louisiana: The New Orleans Pelicans.

With the 2017 NBA All-Star Game and related programming, we saw a clear message from the NBA and the New Orleans Pelicans: Equality Matters. The NBA decided to relocate All-Star Weekend from Charlotte due to North Carolina’s passage of the discriminatory anti-LGBT “HB2.” With our state and city leaders coming together, New Orleans was chosen to host the game due to our ongoing efforts to expand fairness and equality, and became the first All-Star Game to include LGBTQ in the vendor program. The Pelicans welcomed the NBA to our city by draping Benson Tower with one message: Equality.

Off the court, the Pelicans remain a pillar of the community. The Pelicans’ efforts focus on two key initiatives critical to the future success and prosperity of the Gulf South region: the health and sustainability of coastal wetlands and the health and fitness of the region’s children. In conjunction with the Pelicans’ non-profit and corporate partners, the organization is executing several outreach programs that will positively impact and inspire the lives of individuals in the community.

The Pelicans organization, in conjunction with the Saints, has recently instituted an Inclusion Council. The Council’s mission is to cultivate an open, accepting, and distinct culture built on inclusion and transparent communication both within their organization and in our community. And last season, the Pelicans launched an entry-level sales and service training program that emphasizes diversity and development in regional youth sports.

In just a few weeks, the Pelicans will begin their 16th season in the National Basketball Association. Originally named the “Hornets,” the franchise arrived in the Crescent City in 2002 upon being relocated from Charlotte (a preview of things to come!).

We are proud that the New Orleans Pelicans exemplifies the Louisiana values of hospitality, justice and respect. Please stand with us as we honor them with the 2017 Acclaim Award for Leadership. We hope to see you tomorrow night at the InterContinental for the 19th Annual Acclaim Awards gala. It is definitely not a night to be missed!

About Forum For Equality

The Forum For Equality is a statewide human rights organization dedicated to the establishment of a society free from discrimination and to the support of good government. We believe that the fastest and most efficient way to achieve these goals is to educate our communities and to constructively participate in the political process.
View all posts by Forum For Equality →
This entry was posted in Uncategorized and tagged Acclaim Awards, Events. Bookmark the permalink.

This site uses Akismet to reduce spam. Learn how your comment data is processed.